Cutting-edge technology is often dismissed as a toy, something that creates novelty for consumers but does not have practical business use. Few new technologies fit this description better than virtual reality and augmented reality. 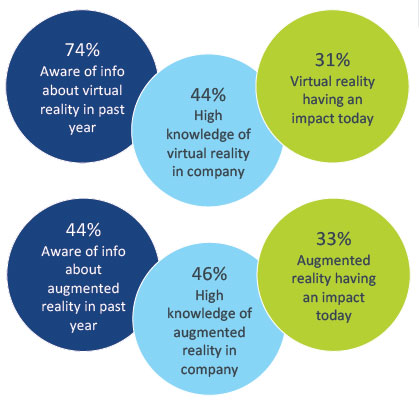 The video game industry has played a major role in embedding these trends into popular culture. VR in particular has been a long-standing goal, with systems such as the Sega VR headset, the Nintendo Virtual Boy, and the Oculus Rift driving gamers closer and closer to fully immersive settings. On the AR front, Pokemon Go has become a primary example used when describing how AR allows for interaction with the surrounding environment.

Most people have a fairly good understanding of what VR looks like. The first ingredient needed to create an immersive experience is a headset that encompasses the field of vision. The simplest VR applications, such as Google Cardboard, stop here but still provide some motion tracking through the sensors in the phone used as the display.

More advanced VR systems, such as Oculus Rift or HTC Vive, provide much higher resolution and refresh rate in order to minimize disorientation. They also offer positional tracking beyond head movement to determine the location and movement of the user and to give them the ability to manipulate the environment with their hands. Of course, these improvements come at a cost. High-end VR systems are much more expensive and also require tethering to a PC or game console for heavy-duty processing.

Rather than providing a completely immersive environment, the goal of augmented reality is to overlay images and information on a user's physical surroundings. This can be done through wearables, such as Microsoft's Hololens, or it can be done through the camera and screen of a smartphone or tablet.

As both VR and AR mature, the two will likely merge in applications that fall under the label "mixed reality."

With VR and AR being so closely related, many revenue forecasts present the two in combination. For example, IDC predicts that worldwide revenues for the VR/AR market will rise from $11.4 billion in 2017 to almost $215 billion in 2021. IDC expects the top industry use cases to be retail showcasing, on-site assembly and safety, and process manufacturing training. In the short term, VR is expected to dominate the spending activity, but AR will soon take the lead.

This revenue projection highlights the broader possibilities that AR brings to the table. Currently, people have an easier time imagining how VR might be used since it has a longer history. But thanks to ubiquitous networking and advances in personal devices, AR is just beginning to be viable. The opportunities to overlay information in a variety of settings will prove valuable to many companies.

Just over 1 in 5 businesses say that they already have a VR/AR initiative underway, and at this point that is likely slanted towards VR. As with revenue forecasting, the CompTIA study lumped the two trends together for initial information, but future research will explore the different applications of the two technologies. 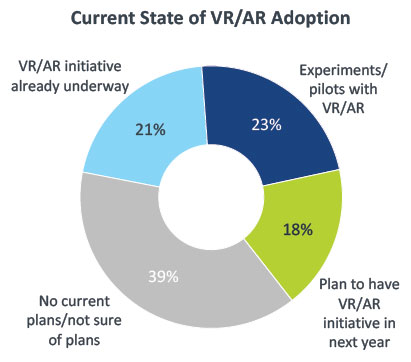 There is an interesting division among the different use cases cited by companies who are already exploring VR and AR. With new technology, businesses typically start by looking at existing activities and translating them into a new model. This behavior is clearly seen in the use cases: Employee training and meetings are activities that are already highly visual, so it is natural to think about creating virtual environments where these things could take place. Similarly, computer-aided simulations already take place in many R&D shops, so extending this with advanced technology makes logical sense. 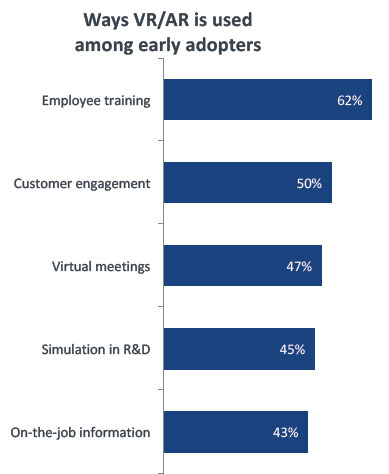 After gaining more experience with new technology, businesses often begin expanding their horizons, and this is where the use cases become interesting. On-the-job information is the least popular use case, but it suggests the use of AR to deliver information to an employee while they are engaged with a task.

Customer engagement, though, is much higher on the list. The fact that this ranks as the second most popular use case implies that companies are adding more innovation to their technology adoption processes. Broad interest in digital transformation proves that businesses recognize the need to incorporate technology in order to be more competitive, but there are also process changes and structural evolution that must take place in order to get the maximum benefit from new tech. If companies are exploring both the transition of existing practices and the potential of new initiatives at such early stages of adoption, that will change the dynamic for skills and ongoing value of IT professionals.

Unlike many emerging technology trends that are extremely broad in scope (such as loT or blockchain), VR and AR systems can be high-functioning even in a smaller installation. The challenges to adoption, then, are more similar to traditional challenges faced when implementing discrete pieces of technology. Eventually, VR and AR will need to fit into an IT architecture growing ever more complex, but early initiatives can be somewhat self-contained.

As with many new technology projects, cost is a major inhibitor. VR is likely to drive more up-front cost than AR since entirely new systems need to be purchased and built out for VR, whereas AR can potentially leverage smartphones as the end user device. Companies also seem to have learned from their experience with mobility strategies—although VR and AR appear prominently in the consumer space, businesses expect there to be a learning curve in properly using these tools in an enterprise setting. 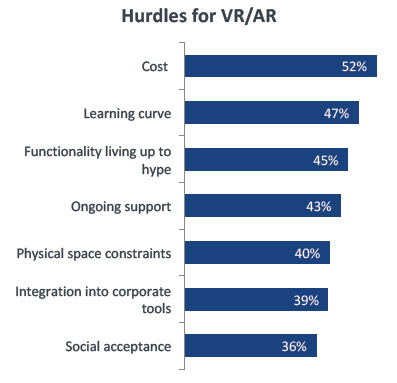 Some of the hurdles currently causing lower levels of concern should not be overlooked. Overall, IT support is a topic that many companies are examining as they utilize new models. Some routine tasks are being offloaded, but this opens the door for more innovative uses of technical employees. In addition, increased demand for technology leads to increased support needs, even though many technologies are making attempts at being user-friendly. With a strong real-time component, VR and AR will create unique support demands to fulfill the expectations of those using the systems.

Integration is always a major part of any technology project, and once again VR and AR systems will present some unique challenges here. Rather than simply presenting new visual possibilities, IT will want to capture new types of data to better understand how the tools are being used and where they might create additional business value.

Finally, social acceptance of VR and AR currently ranks lowest on the list of challenges, but this will definitely affect adoption throughout a workforce. As with natural language interfaces, it is not yet clear what social norms will emerge around public use of headsets or wearables. Attitudes will certainly differ across different generational cohorts, making VR and AR trends that will grow steadily over time rather than being overnight sensations.

This research brief is part of a larger study conducted by CompTIA on the awareness and application of emerging technology. Other topics in this series include: artificial intelligence, AR/VR, automation, drones, and the business implications of early stage technology.

The quantitative study consisted of an online survey fielded to U.S. workforce professionals during October 2016. A total of 701 businesses based in the United States participated in the survey, yielding an overall margin of sampling error proxy at 95% confidence of +/- 3.8 percentage points. Sampling error is larger for subgroups of the data.

CompTIA is responsible for all content and analysis. Any questions regarding the study should be directed to CompTIA Research and Market Intelligence staff at [email protected].

The Computing Technology Industry Association (CompTIA) is a non-profit trade association serving as the voice of the information technology industry.

CompTIA’s efforts to address issues related to emerging technology include member-led communities focused on businesses and IT professionals along with a policy group focused on legislation and regulations.