The rise of Bitcoin has rapidly led to interest in blockchain, the underlying technology behind emerging cryptocurrencies and a range of other possibilities. If a new technology can redefine the concept of currency and disrupt the entire financial system,what can it do for business applications? 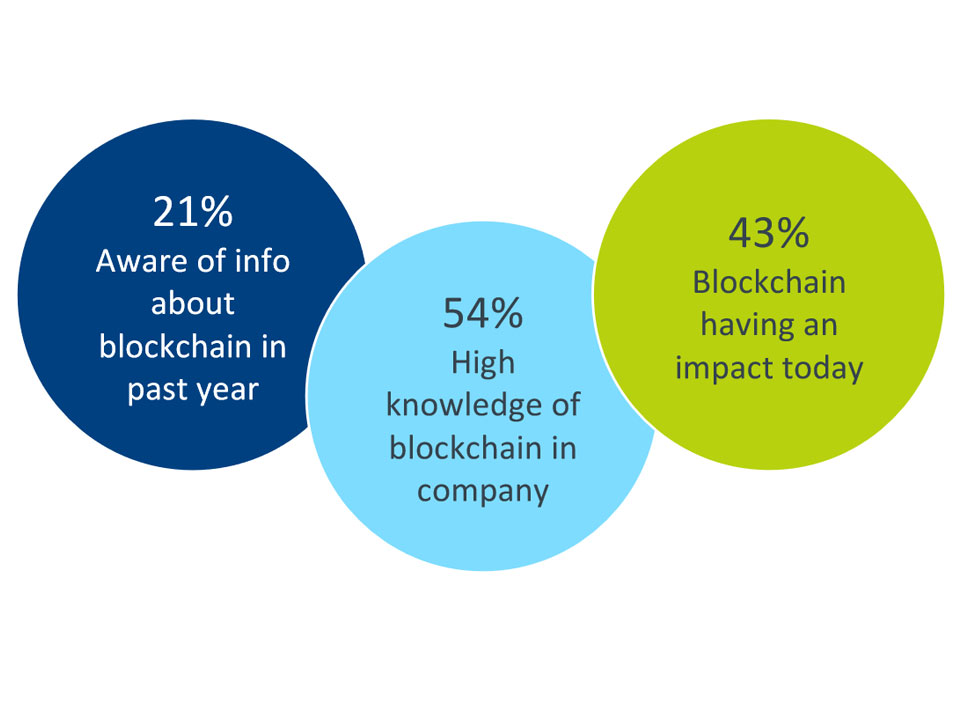 Given that blockchain functions more as a building block rather than a tangible product, the level of awareness is low—just 1 in 5 companies have recently consumed some type of information about blockchain. Those companies, though, appear to be the ones most interested in pursuing blockchain opportunities. Among the companies with some awareness, there is a relatively high incidence of a strong knowledge base or an existing business impact.

With blockchain being featured in more and more headlines, it is a primary of an example of technology that has a gap between “theoretically possible” and “practically achievable.” Certainly Bitcoin is a viable form of currency (especially among developers of ransomware), and this leading application has led to serious exploration within the financial industry. Other active use cases are less common, and Gartner projects that blockchain is 5-10 years away from mass adoption.

At a high level, blockchain has a simple description: it is a method for recording transactional information. Rather than keeping a record of all transactions in a central location, blockchain utilizes a distributed ledger. For a given activity, a copy of the full ledger with all transactions is kept on each node in a distributing network. The blockchain method provides many benefits over centralized forms of record- keeping, including transparency of data and no single point of failure.

However, the distributed nature of the technology also highlights one of the primary adoption challenges. Blockchain implementations utilize a broad network, and replacement of a centralized system requires the participation of everyone in that system. So a very large organization with an internal system could take on its own blockchain project; a system with multiple parties and an independent central agency needs coordination and cooperation.

Blockchain technology has many layers. There are several different blockchain protocols on the market, with different protocols built using different consensus algorithms or different legacy integration methods. Bitcoin is the most well- known protocol, with other examples such as Ethereum or Ripple gaining traction. Many vendors are creating services on top of these protocols, such as IBM’s Blockchain as a Service (based on the Hyperledger Fabric protocol) or Microsoft’s Coco framework(compatible across multiple protocols).

Ultimately, most businesses will not need to understand blockchain specifics if they are not directly developing new applications. Rather, they will invest in new blockchain-based applications as vendors leverage benefits in cost, security, or agility.

Since blockchain is not an item that will be sold directly, market impact is difficult to determine. Estimates for future blockchain-related revenue range from approximately $10 billion to $20 billion in the 2024-2025 timeframe. To put this in context, Gartner estimates worldwide public cloud spending to reach $246.8 billion in 2017.If revenue projections do not quite justify the level of hype around blockchain, the answer may lie in venture capital investments. According to the media and information firm CoinDesk, VC funding in the blockchain ecosystem hit $1 billion across 2015 and 2016, and a rapidly growing percentage of this money is being invested in initial coin offerings (ICOs), where startups offer investors tokens of cryptocurrency rather than shares as in a traditional IPO.

This highlights the potential disconnect for blockchain: while it may become highly valuable as the foundational mechanism for transactions, it may not be a tool most businesses use directly. Across all companies in CompTIA’s survey, 22% are actively developing tools using blockchain— approximately the same percentage that indicated recent familiarity with the topic. Blockchain may eventually be a part of many tools within a company, but it may not require a deep working knowledge at every organization. 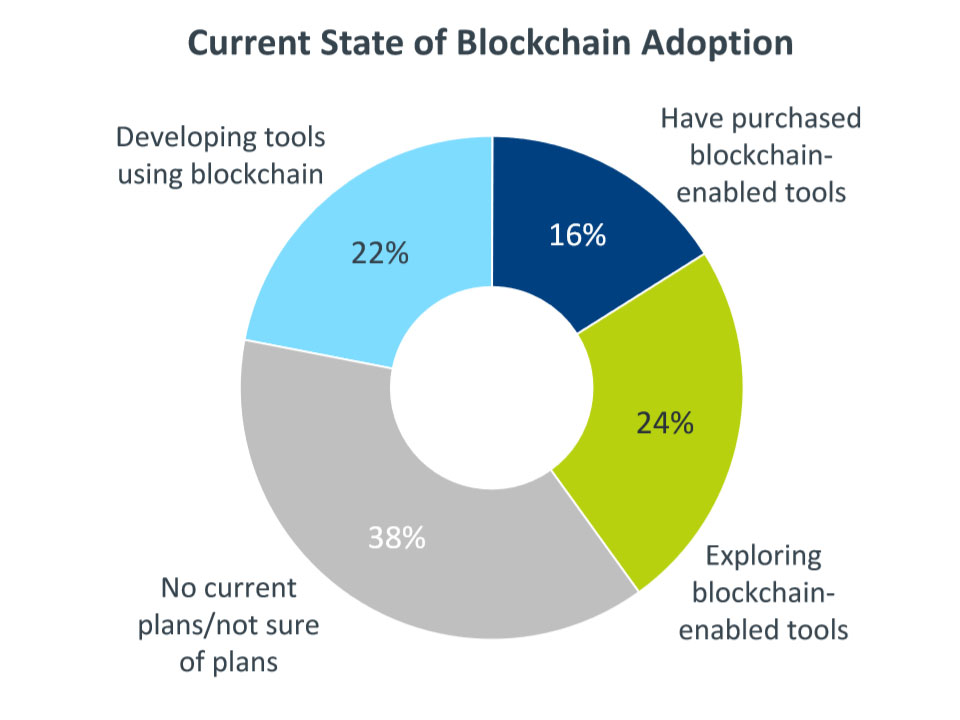 As is often the case with early-stage technologies, there is a tight clustering of potential use cases for blockchain. Although cryptocurrencies are currently a primary driver for blockchain discussions, it makes sense that they would fall to the bottom of the list for potential corporate applications. Most companies likely have no interest in building their own cryptocurrency, and payment methods using cryptocurrencies can simply leverage one of the many competing platforms already in existence. 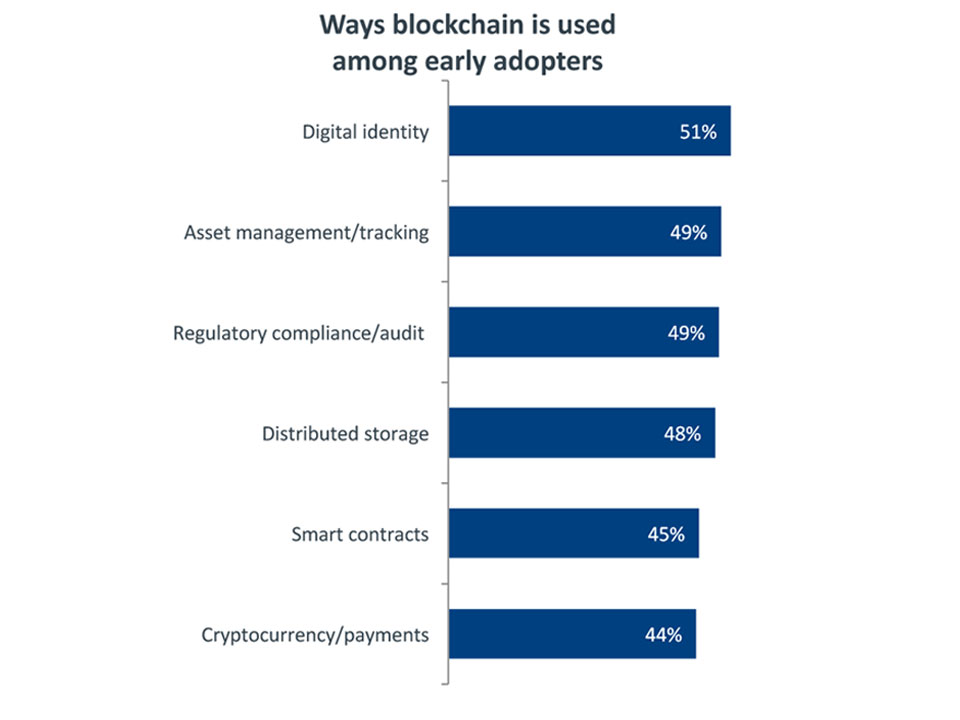 Security in general is experiencing disruption as companies re-evaluate their approach, so it is no surprise to see that firms are exploring blockchain as a way of confirming digital identity or keeping an audit trail for compliance. Of course, new blockchain vulnerabilities will likely be discovered as it becomes a more significant platform for attackers, but it still holds the potential to provide enhanced security around digital operations.

Common business practices such as asset management and contract agreements may also benefit from blockchain. By redefining consensus and validation, unneeded layers can be removed from the processes, making them more streamlined.

Finally, companies are exploring the use of blockchain for distributed data storage. A change to storage methodology is one of the top issues IT teams deal with during cloud transitions, and blockchain storage provides a potential option for enhancing storage practices.

These scalability problems obviously occur at high volume, but they are important considerations given that improved speed is a top driver for blockchain adoption. Companies here are talking about the speed of a single transaction, hoping that cutting out a middleman will improve turnaround times, but average transaction speed could become a hidden cost for a production system. 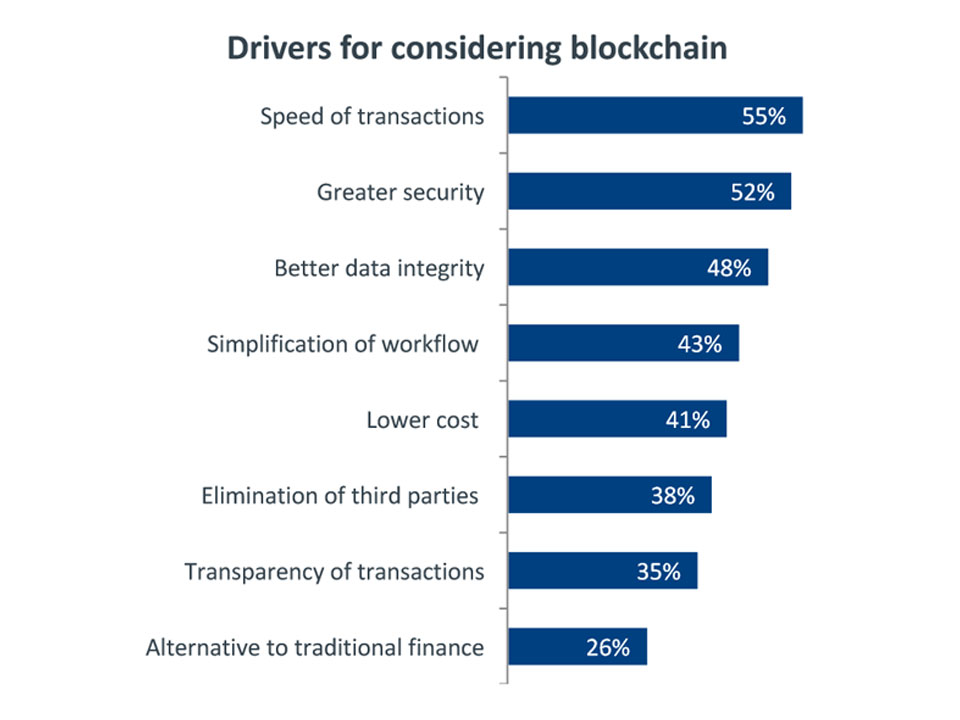 Simplification of workflow touches on a common issue across all digital transformation efforts. While implementing and integrating new technology requires significant effort, companies find that modifying workflow to best utilize the new technology is an even bigger challenge. If blockchain is meant to change workflow, companies need to include costs of process transition or new training to the budget.

Elimination of third parties may prove to be the most disruptive aspect of blockchain, which consequently leads to the largest challenge. Again, processes can certainly be streamlined by removing overhead. But this overhead often helps provide a high degree of certainty, and it also drives significant employment and economic activity. Blockchain solutions must clearly provide the same level of confidence, and they will likely pass through major resistance on the path to broad usage.

This research brief is part of a larger study conducted by CompTIA on the awareness and application of emerging technology. Other topics in this series include: artificial intelligence, AR/VR, automation, drones, and the business implications of early stage technology.

The quantitative study consisted of an online survey fielded to U.S. workforce professionals during October 2016. A total of 701 businesses based in the United States participated in the survey, yielding an overall margin of sampling error proxy at 95% confidence of +/- 3.8 percentage points. Sampling error is larger for subgroups of the data.

CompTIA is responsible for all content and analysis. Any questions regarding the study should be directed to CompTIA Research and Market Intelligence staff at [email protected]