2018 HHS State of the States Survey

The purpose of this annual research initiative is to gain and share insights from state and local HHS thought leaders relative to agency IT issues, challenges, trends, and perspectives. The results are being shared nationally for the benefit of HHS agencies and to raise visibility of how agencies are addressing those challenges.

While the current federal administration moves health and human service programs in a new direction (which include work requirements among other things) state agencies still find themselves in a similar position of having to do more with less. Despite the economy surging and the unemployment rate falling, there are still millions of people living in the United States that require health and human service benefits to meet basic needs. States find themselves with similar challenges from previous years, that is, budget constraints, inefficient infrastructure and high consumer expectations.

As in previous years, states report top three barriers for achieving modernization include budget constraints, procurement obstacles, and workforce limitations. The expiration of the temporary exemption to the cost allocation methodology required under the Office of Management and Budget (OMB) Circular A-87 (set to expire in December 2018) may potentially exacerbate budget constraints. However, a positive data point to take away from this year’s survey is that barriers previously reported seem to be lessening. Specifically, barriers related to vendors, federal funding, policy, security requirements and project governance were all scored at a minimum. Thus, if states can significantly mitigate barriers under their control, they will have a greater runway to progress on service delivery modernization. 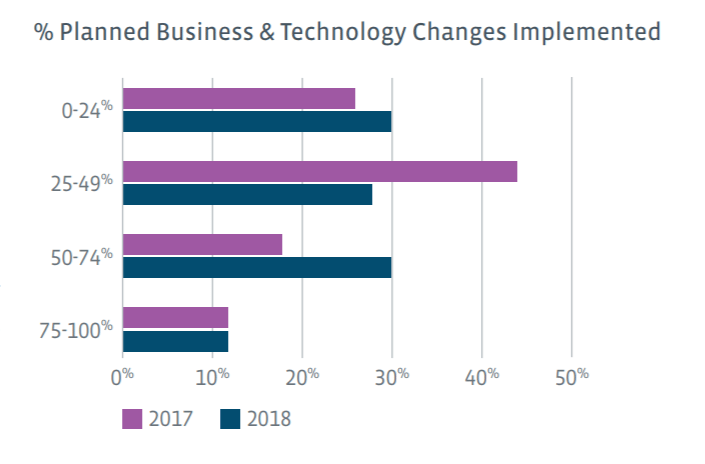 CURRENT SERVICE DELIVERIES ACROSS THE COUNTRY

No surprise that the newer technologies like Chatbots, Nudging and RPA are just beginning to be employed in service delivery modernization. This will be a trend to pay close attention to in the immediate to near future. 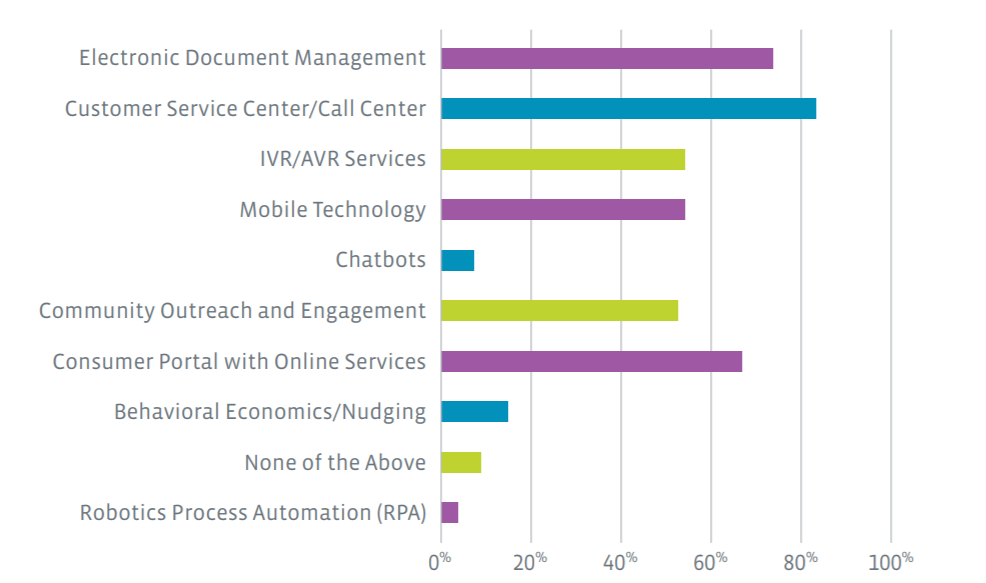 Like 2017, Customer Call Centers and Integrated Voice Response (IVR)/Automated Voice Response (AVR) solutions continue to lead the approaches state agencies implement and modernize to enhance and maximize the client experience. The trend data shows that states are moving away from less “hands-on” self-service options like “general program information” and “getting directions” to offices. This may be due to other, more convenient channels, like mobile applications via iOS and Android. Also, of note, is that over half (52%) of clients still request to speak to an agent.

As most are aware, state agencies are not typically in the business of standing up/staffing call centers with state employees. However, there were certain federal requirements mandating a state merit employee handle specific program eligibility processing. In 2017, those requirements were relaxed somewhat. We were curious if this impacted the call center staffing models. In 2018, just over half the states indicated that they utilize a state employee only staffing model. The other half of the states are evenly divided between a vendor only model or a blend of state employees and contracted staff. When asked if the relaxation of the federal requirement was a contributing factor in utilizing contracted staff, less than ten percent of the states answered in the affirmative.

Mobile technologies continue to be a part of state agencies move to service delivery modernization. And not surprising is the fact that 82 percent of the mobile focus is aimed at the customer. Mobile access for HHS workers and providers is increasing but realized efficiencies in program administration remain to be seen.

States continue to build on their existing online customer portals to provide for client self-service. The 2018 data reveals an interesting finding that client self-service access for the renewals process continues to lag behind the ability to apply for benefits. Given the renewal process in some programs may be simpler than the application process, one might expect the online renewal of benefits to equal or outpace the application rates. Below is a comparison of the online components states have implemented over the last two years. 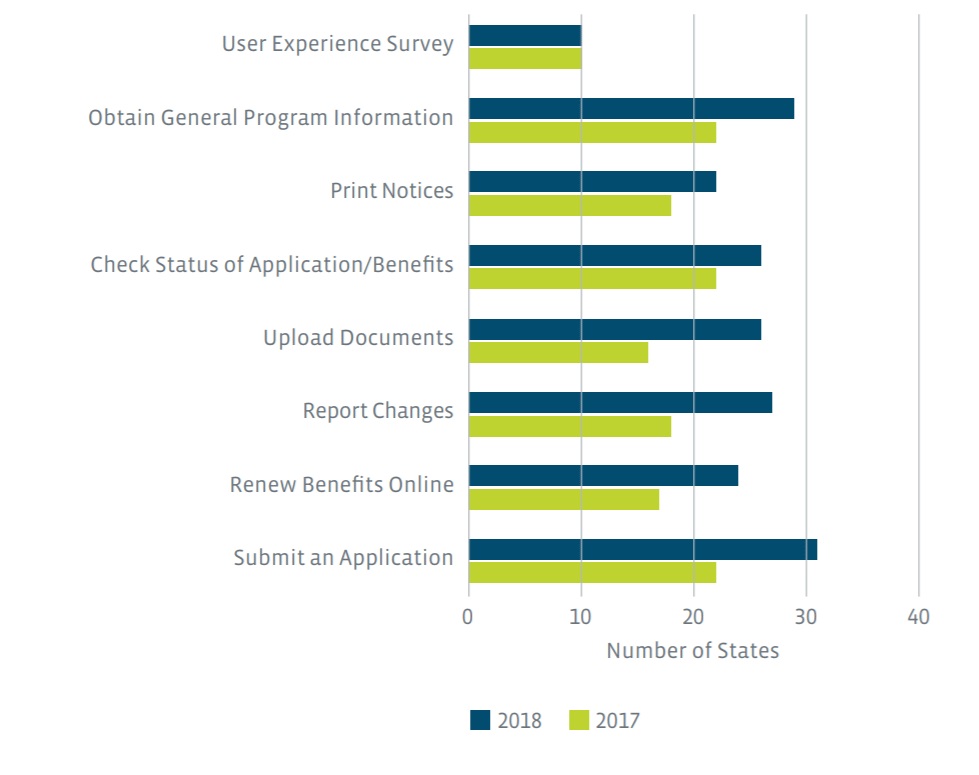 States vary in their desire to implement no touch/ low touch as a business process to streamline work tasks and ease the burden on the customer especially when agencies have access to data. Just over half the states feel that this is an important strategy for tackling service delivery modernization. What is interesting is that almost 75 percent of those states feel that insufficient technology/automation and their ability to leverage previous technology investments is a major factor in why they cannot achieve their no touch/low touch goals.

Despite the Federal Administration being in place for more than a year now, state agencies are still unsure of how they will be impacted on changes in public policy. With a new Farm Bill being negotiated in Congress and the President’s directive on work requirements, states realize change is coming, but they don’t know how that will affect their service delivery modernization efforts. Almost half the states indicate that it is still too soon to tell.

What is clear from the survey is that a vast majority of the states are or will be (over the next 2-3 years), involved in a service delivery modernization project. Only four percent of states indicated that they are currently in a maintenance mode for their recently implemented effort while another four percent have just recently identified that they have a need to begin a new project.

The emerging trends/technology section of our survey once again provided some interesting directional insights. For example – the majority of respondents identified Chatbots and other Digital Assistants as the emerging IT area that will be most impactful to their agency in the next three years (55%). This appears to reflect the desire to leverage another channel for disseminating key information and direction to agency customers in a more automated fashion. This may also reflect the realization that the most precious resources within any organization – the staff – need to be focused on the more complex functions and service delivery. Another response that received a high percentage of the responses was Artificial Intelligence and Machine Learning (45%). This is also consistent with what is happening in the private sector – where companies use these technologies to automate more mundane tasks and standardized functions so they can dedicate more resources to innovation and advancement.

We also continued our line of questioning about the implementation of a Master Citizen Index. Interestingly, the vast majority of respondents indicated that implementation had been either somewhat or highly successful (40% and 8% respectively), or it had at least been implemented, but was too early to determine the level of success (50%). This certainly reflects a realization that these “golden records” are vital to modernization of HHS agencies, and central to success. Only three percent indicated that it had been unsuccessful so far.

A new question was added this year on whether states have a separate organization dedicated to researching and recommending new technologies – similar to an R&D unit within a corporation. We weren’t really sure what to expect for a response to this question – but were pleasantly surprised to learn that 34 percent of respondents said that one does exist. We will look to ask this again next year to see if we see some growth in this area. With the blurring of the lines between the “program” and “IT” components of an agency, we think that this may be a good model for states to embrace.

When asked what emerging IT area will be most impactful to their agency in the next three years, state leadership answered with the following:

Within the last several years, changes in federal policy have driven the states to explore and/or adopt a modular architecture approach. The degree of federal encouragement for this solution approach varies significantly across programs. For example, the Centers for Medicare and Medicaid Services (CMS) mandated a modular approach for its Medicaid Enterprise Systems as a condition of the federal matching funds while the Administration for Children and Families offered modularity as a flexible option in its repeal and replace of SACWIS regulations for CCWIS regulations.

Though it is still relatively early in the transformation to modular solutions, modularity still has not seen much movement in adoption rates year over year. Currently, 70 percent of respondents are either reporting No Adoption or Early Stage Adoption.

Transformation to a modular solution does not occur without significant business and organizational changes. When asked about concerns around the change, states identified a number of issues with management of multiple vendors, modular definitions and governance being much more of a concern than the IT aspects or business value derived from such an approach. 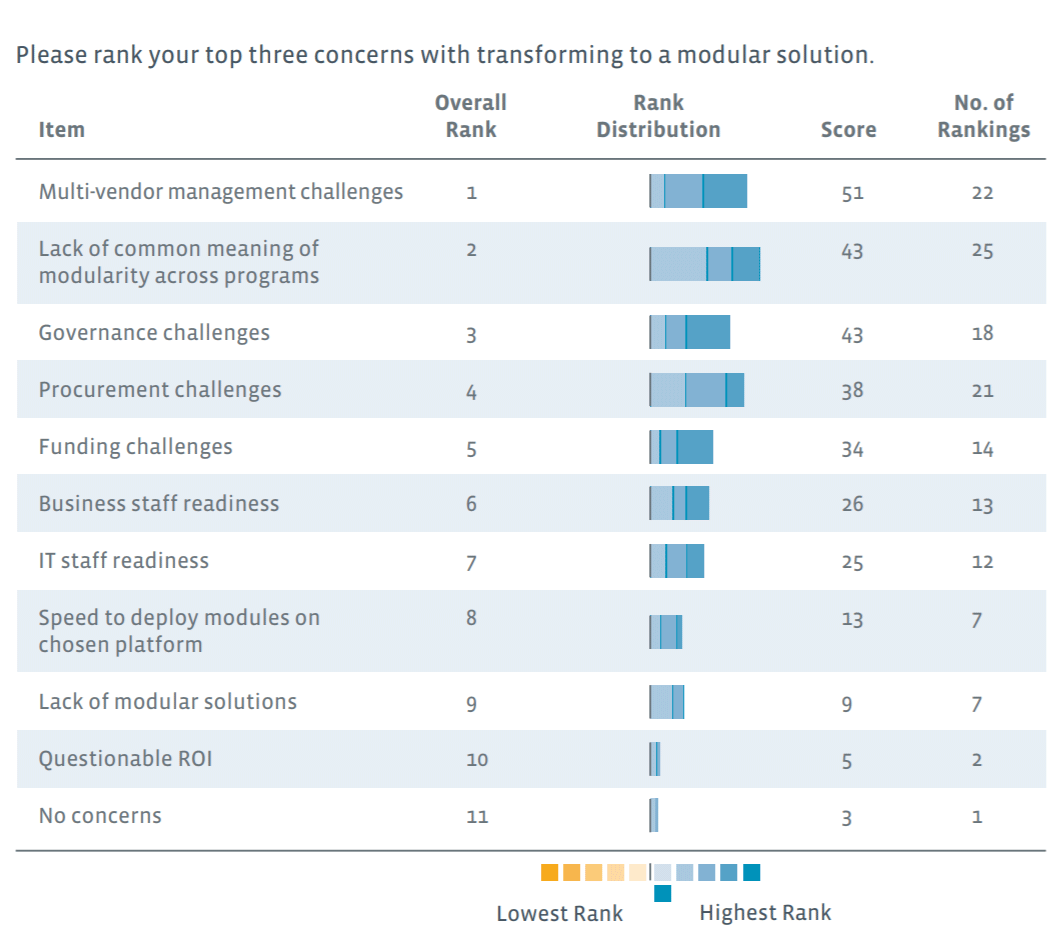 While confusion may exist around solution transformation issues (multi-vendor management, procurement and modular definitions) there is clarity around deployment approach and a broader acceptance of cloud-based solutions. Nearly 48 percent of respondents suggest they would consider deployment via SaaS or Hosted Private Cloud solutions, while more than 85 percent suggest they would consider a Hybrid deployment solution. This suggests a move beyond traditional legacy, on-premise deployments and seemingly, an acceptance that privacy and security have improved to the satisfaction of those making these type of deployment decisions.

While the national debate continues regarding what policy changes will be enacted for Health and Human Service programs, some policy priorities of the administration such as work engagement are being encouraged through guidance and State flexibility offered through federal waivers or state policy options. To capture information regarding how States might be leveraging this flexibility, or in general, what policies they may be concentrating on, we have added a new section to our survey focused on State policy initiatives.

In response to a question regarding what major policy initiatives the State is actively working on or is planning to do, it is likely no surprise that Supplemental Nutrition Assistance Program (SNAP) Employment and Training (E&T) policy received more votes than any other policy, given the recent focus on E&T compliance and the strict adherence to able-bodied adults without dependents (ABWDS) policy. Equally understandable is the close second, the Opioid Crisis that is unfortunately affecting so many lives across our country and is a major focus with State leaders across the nation. Rounding out the top three initiatives is policy related to cross program fraud initiatives.

IMPACT ON PLANNING AND PROGRAM MANAGEMENT

To address these policy initiatives, States report this effort has a significant impact on their program planning and management in the coming year.

The top three types of technology that states report they are expecting to leverage for their new policy initiatives include:

Other cited technologies include:

As states move forward to focus on their policy initiatives, 79 percent report moderate or significant reliance on technology to support their efforts.

When prompted for the top three constraints impacting the State’s ability to move forward with their policy initiatives, budget constraints topped the list with respondents citing challenge in 67 percent of the responses. Technology challenges (35%) and workforce limitations (27%) rounded out the top three identified constraints. Other notable responses identified by 20 percent or more of the respondents included the following:

This year’s survey increased participation from 32 individuals from 25 distinct states in 2017 to 56 individuals from 31 states. Half of respondents served in an IT role, while others served in program management or policy, with a smaller representation from the policy arena (4 percent). In response to which programs our respondents are associated, the highest reported programs were equally distributed across SNAP, TANF or Medicaid. However, there was also a strong representation from child welfare, child care and child support. This diverse swath of participants indicates the need for HSITAG to continue to serve the broad HHS community in their endeavors to be the voice of the IT industry working with HHS agencies across the United States.

Responses were kept confidential and are not attributable back to individual respondents or states. However, if initiated by respondents, HSITAG members may have discussed survey questions in more detail with respondents during and after the survey period offering further insight and context into responses. HSITAG members, in partnership with the CompTIA research team, have collated and analyzed the results which were then announced and shared at the annual APHSA ISM Conference in September 2018 in Seattle.