Understanding Blockchain, Its Benefits, Challenges and Impacts on Business

March 23, 2021 | By Ashley Watters
Blockchain offers enormous potential in today’s tech landscape, but there’s also uncertainty around the technology and how it can be applied to solve everyday business problems. A panel of experts offered explanations and answers during CompTIA’s Councils & Communities Forum Online. 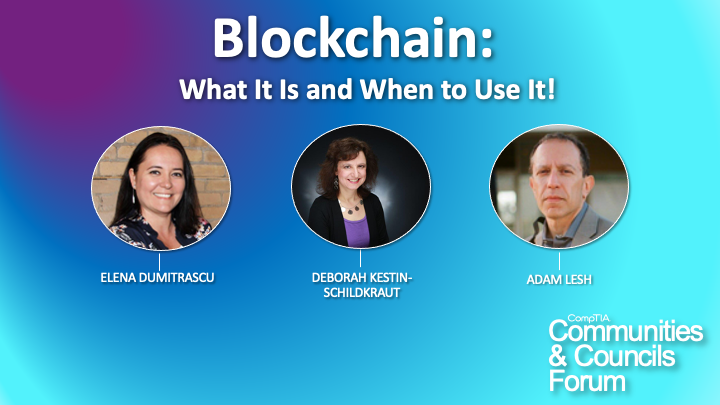 Blockchain offers enormous potential in today’s tech landscape, but there’s also a good degree of uncertainty around the technology and how it can be applied to solve everyday business problems.

What is blockchain and how can it be used to accelerate businesses? A panel of blockchain experts recently answered those questions—and more—during a session in CompTIA’s Councils & Communities Forum Online.

The consensus: while there are a lot of myths about blockchain, it is a secure means to store, access and analyze data, but it may not be the best technology for every use case. The more you know about it, the better decision you can make for your specific environment, the panelists said.

What Exactly Is Blockchain?

Blockchain is a collection of information that is stored sequentially in small databases, known as blocks. Each set of information is encrypted in the block, creating a permanent record which is visible to all users with access to the technology. As blocks are added to the chain, a record of all actions is created in chronological order, which in turn produces an immutable ledger of data. The stored information can only be accessed by authorized parties. The owner of the information retains the right to provide or revoke access to the block of information as they see fit.

“When I want to get it down to the most basic, I always use the example from elementary school where you make the paper chains that interlock. Each piece of the chain is that block of information that’s getting shared to constituents along the way,” says Deborah Kestin Schildkraut, IBM Blockchain &Global Alliances Ecosystem Marketing Leader and chair of CompTIA’s Blockchain Advisory Council.

Blockchain shows great promise for businesses, allowing for secure access to information, greater transparency, and inherent validation, along with enhanced efficiency and security. As a fundamentally decentralized collection of information, blockchain also provides the possibility for trusted transfer of information without the oversight of any governing entity.

According to Statista, forecasts predict spend on blockchain solutions will reach nearly $18 billion by 2024.

“The technology as a whole is a combination of built-in workflow logic, which we call smart contracts, and data storage which is, in a way, similar to a database. A big difference being that, depending on the rules of your software, whatever gets stored also gets shared with members of that software system,” said Elena Dumitrascu, CTO of TerraHub Technologies and vice chair of CompTIA’s Blockchain Advisory Council. This visibility creates a system of inherent validation because actions are visible to all users of the blockchain.

How Is Public Blockchain Different from Private Blockchain?

Public and private blockchains only differ in terms of user access and are often referred to as permissioned or non-permissioned. Public blockchains can be accessed by anyone and the information is stored on all connected systems across the globe. By contrast, private blockchains can only be accessed by individuals who have been granted access. Despite the implications behind the terms public and private, information remains protected, limiting access to only those bearing the encryption key. The record remains while the access to the block can only be granted by permission of the owner.

What Is the Difference Between Cryptocurrency and Blockchain?

Given the widespread media coverage of Bitcoin and the spreading popularity among some high-profile brands, there is a certain amount of attention given to cryptocurrency. Consequently, cryptocurrency and blockchain are often perceived to be synonymous. In fact, cryptocurrency is simply money that utilizes blockchain as the underlying technology for secure storage and transfer. “Cryptocurrency is a use case of blockchain,” says Adam Lesh, technologist with AL Consulting and chair of the Blockchain Advisory Council. “Blockchain is what makes it possible for people to hold money in a place that’s not a bank in a distributed way, a decentralized way.” While an ideal application for blockchain, the technology offers potential far beyond cryptocurrency.

Where Can I Use Blockchain?

Breaches have taught us the value of information and the need to keep it secure. UpGuard reports that the global cost of data breaches is expected to reach $6 trillion annually this year. Blockchain provides the possibility for validation and visibility unlike anything available previously. The true value from a business perspective is the potential for transparency, having an immutable record where you can always validate and trace information.

“If we think about all the places today where we’re wasting time trying to prove something, this technology becomes very useful,” says Dumitrascu. “It keeps…a live set of records that can be seen by various members of the solution in real time, thus eliminating the need to go back and search for proof of what happened and when.”

So, where does blockchain make the most sense? There are many situations where our traditional governance models are no longer the most efficient or secure method. Here are some examples of where blockchain becomes the ideal solution.

Despite these very exciting possibilities, blockchain is not the right solution for every business problem. “Although it is a promising technology with enormous potential, it doesn’t suit every situation,” said Lesh. “It’s a support tool, it’s a database and it allows for programming, but it has special use.”

To help identify if blockchain might fit your specific use case, check out CompTIA’s Blockchain Decision Matrix, developed by the Blockchain Advisory Council.

With the threat of data breaches becoming more prominent in business operations, security is a persistent concern. Because the information on a blockchain is accessible by all users, it is often believed to be insecure. But, the information itself is only accessible to those who permit access. The indelible nature of that information only enhances the security, rather than diminish it. Because all users can see information that is appended and can access historical records, misinformation and error are far less likely.

The potential for malicious attacks is also significantly lower. Historical access to transactions makes blockchain very difficult to penetrate. Most often, attacks come in the form of social engineering, rather than vulnerabilities in the technology itself. “Hacks don’t occur on the actual blockchain,” said Lesh. “It’s social engineering, getting access to passwords and identity, but never to the actual technology itself.”

Blockchain also become more secure with permission. Users can grant or revoke access to data as needed so that businesses aren’t storing private details unnecessarily. “When it comes to data security and when it comes to stopping the oversharing that’s happening in the world right now, blockchain can be quite a useful tool as we carry on with everyday business,” Dumitrascu said. 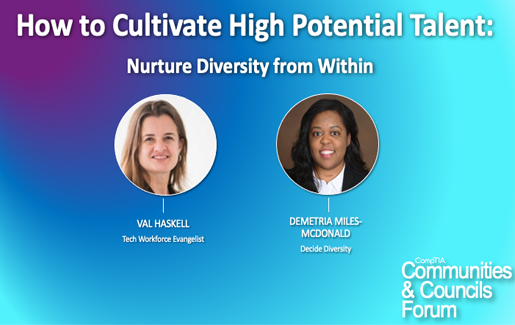 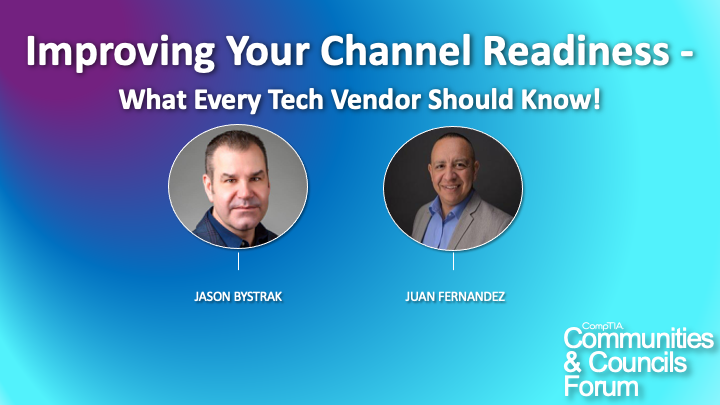 Are You Ready for Channel Success? CompTIA’s New Assessment Tool Has the Answer
Newest on top Oldest on top
Load more comments